Stina Oredsson is a professor at the Department of Biology at Lund University. Her perfect place is in the lab with her students – far away from publications, prizes and international conferences. Her research paves the way for modern cell culture that is completely free from animal products. Stina Oredsson develops animal-free cell-based methods. 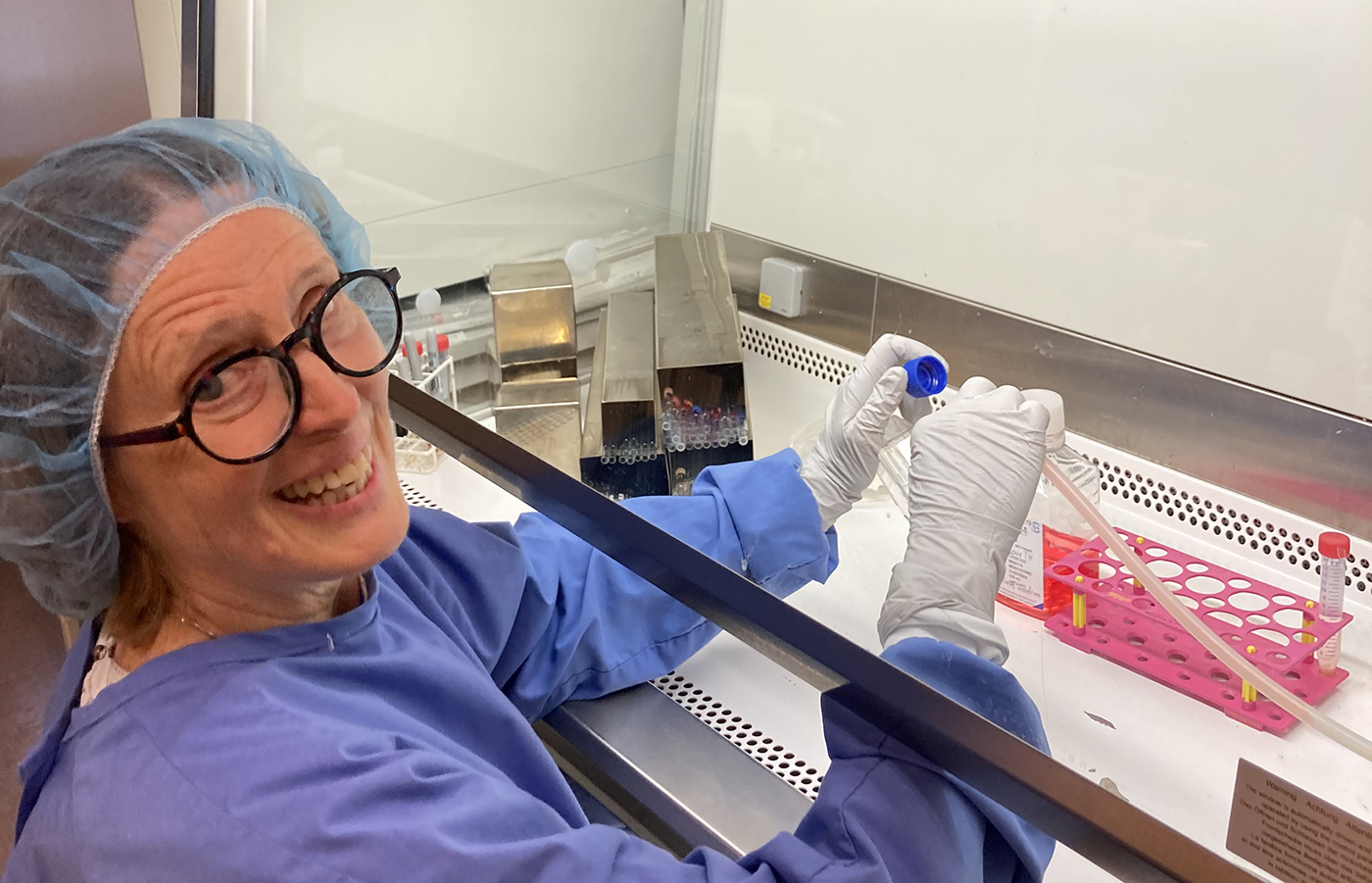 Stina Oredsson in her lab at Lund University.

Already in her early research career in the 80s, Stina decided to stop using mice for her research. She could see animals suffer, but also how the animal experiments in her particular case did not produce useful results.

Then and there she decided to conduct studies only using cell models with the purpose to increase the understanding of how chemotherapy works. In these cell models, cancer cells from real tumours are grown outside the body in a nutrient solution, a so-called cell culture medium.

Stina's research involves, among other things, studying cancer cells that are resistant to treatment, so-called cancer stem cells. Modern chemotherapy drugs have a limited effect on these cells, so we need to find other substances that can inhibit them, explains Stina. Among other things, she has studied the effects of various substances together with researchers at Kemicentrum in Lund and with researchers from Bolivia and Ethiopia, where substances have been isolated from plants used in traditional medicine.

Her research group uses different cell models, which are constantly being refined. It is also about developing the environment around the growing cells, to mimic the conditions of the human body as far as possible.

Traditionally, cancer cells are grown in two-dimensional (2D) and flat environments, i.e. on a flat surface. However, a tumour does not grow that way in the body and does not consist only of cancer cells. A tumour grows three-dimensionally (3D) as a lump, and contains several different cells in addition to cancer cells.

Stina is working more and more with 3D cultures that are supposed to mimic a tumour lump in the body and where cancer cells can be co-cultured with normal healthy cells. In order to grow cells well in 3D, they require support in the form of protein fibers, for example collagen, which is found naturally around cells and is what we call an extracellular matrix.

Stina herself and her research group use biocompatible polycaprolactone fibers, which mimic the 3D structure formed by collagen. It is a sort of artificial 3D fiber network on which the cells grow that is covered with collagen and other proteins. Stina and her colleagues have shown that this 3D tumour outside the body resembles a human tumour.

Many products that have been isolated from animals are traditionally used in a cell culture, mainly in various media that the cells need in order to grow and survive. Stina is trying to switch to cell culture that is completely free of animal products. It is not just an ethical question, but rather a scientific question to use the best method that mimics human physiology.

— If we want to use cell culture to understand processes in human cells, we have to start from human conditions and environment that exists in our body, she says.

Stina believes that it is simply not scientifically correct to use products from other species. She and her research group have developed a completely animal -free culture medium with only human proteins, in which they can grow normal cells and cancer cells in both 2D and 3D.

— We cannot continue to use animal-derived products just because we have always done so. The more refined our analytical methods become, the more important it is to create human cell culture systems.

Stina is lecturing at her last course in toxicology before retirement. For the first time ever students in this course make five advanced laboratory tests to investigate the toxicity of various poisons using completely animal-free cell models.

— It is perfectly possible to use cell culture without animal products in teaching and research, says Stina. You just have to dare and let it take a little more time from the beginning.

Stina also points out that the development of organs-on-chips is progressing rapidly and gaining more and more areas of use, which will revolutionize the way we study cellular and physiological processes in the future. We can get pretty much everything from humans into a "human-on-a-chip" model, says Stina. The only real limitation she sees is the nervous system.

The path to animal-free research

Stina raises the issue that many scientific journals still require animal experiments to publish a study that is mainly carried out in a cell culture.

The issue is not that animal testing is expected, but that the system does not require a number of standardized tests in cell models on how normal cells are affected by a certain substance. Stina believes that it should be mandatory to investigate whether the substance has negative effects on, for example, heart cells, liver cells and nerve cells. These are common reasons why potential drugs do not make it all the way through clinical trials. She believes that in drug development, more preclinical tests could be done in cell models before moving into animals.

She also believes that people must start questioning on a broad front what is today considered to be the golden standard both in the form of animal experiments and animal-derived products in cell culture. Why are animal-based models and media still the default? What does it take to step over to completely animal-free setting? According to Stina, both knowledge and courage are lacking in Sweden.

— Look at what research is rewarded and funded! Much more money would be needed for animal-free research than is it available today. And there are many who need to absorb the knowledge that there will be scientifically more relevant results if we use animal-free cell culture. This applies to everybody from politicians to members of animal experiment ethics committees and individual researchers. Come to my lab in Lund, urges Stina. I am happy to show and explain to anyone who wants to know.

In the same way that researchers have to explain their method choices in a study, they should also describe why they have used animal-derived products in their research and what effect it might have on the results, Stina believes.