Zebrafish is an increasingly popular animal model used in research, which calls for more knowledge on their wellbeing and their pain and stress responses. 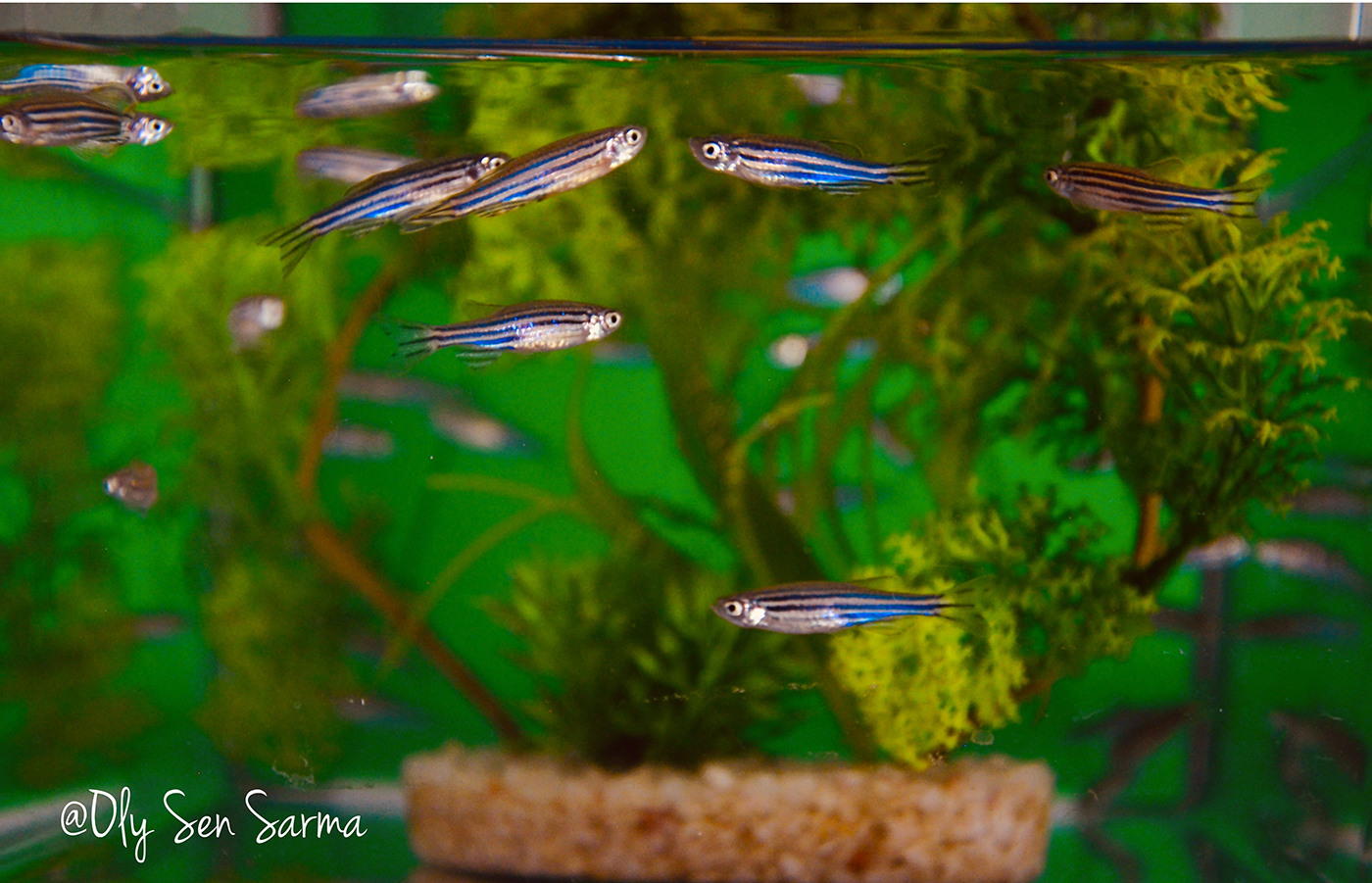 Zebrafish in a facility at Uppsala University.

The Swedish 3Rs Center has met two well-known researchers within this area in Sweden: Lynne Sneddon and Svante Winberg. They both use fish in research and teaching and we aim to describe some of their work and ongoing projects on zebrafish related to the 3Rs.

Lynne Sneddon has done her major research in the UK at the University of Liverpool and at the Roslin Institute in Edinburgh. Today she is a senior lecturer at the University of Gothenburg in Sweden. Her research on fish behaviour related to pain, fear and stress has had a great impact on the global knowledge about fish. You might have seen her in public media telling about fish and fish behaviour.

Svante Winberg is a professor at Uppsala University and for the last 15 years, he has worked at the Department of Neuroscience (Department of Medical Cell Biology today) at the Faculty of Medicine. His work has given him the name “the Fish Man” among medical students even outside the university. Right now, he educates the entire staff at the university’s new zebrafish facility, which will have thousands of tanks and a robot feed.

Lynne was the first to characterise nociceptors that detect painful stimuli on the head of a fish, in a way that is very similar to humans. This was in the beginning of the millennium and since then she has continued her work in refinement areas such as tagging of wild fish, monitoring of fish and fish anaesthesia.

— A fish that experiences pain is responding much the same way humans do, Lynne says. I performed studies that showed signs of pain in the fish, which were not just reflexes, but physiological activities that underpinned profound behaviour changes.

Fish in pain act in ways that would be irrational and even dangerous for them in a natural environment. Lynne’s research has shown how one can prevent this behaviour by giving the fish pain relief.

She has studied different ways of pain relief, studies that has helped her and her colleagues to come up with standardised protocols. Funded by the British 3Rs Center, NC3Rs UK, she has developed a software tool, which helps researchers to monitor the fishes and their wellbeing. The software tool indicates when the fish is stressed or feels pain and the caretakers will know that there is something wrong allowing them to intervene and improve welfare.

Fish wellbeing is crucial for the results in a research study. To use stressed fish or fish in pain in an experiment will have negative effects on the result.

Svante Winberg’s research focuses on density in tanks. A low density of fish will increase the aggressive behaviour and the dominance hierarchy in the tank. That is not a good welfare, and stresses the fish. A high density is also stressful for the fish. The density is clearly crucial for the wellbeing.

— Right now, we study how to improve the wellbeing for isolated fish, a procedure that sometimes is necessary to identify individual fishes in laboratories. How can we refine this procedure? For example, we study the positive effect of visual contact with other fishes in nearby tanks.

Other studies are about fish acclimatisation to regular procedures in a lab, like moving in and out from tanks, cleaning of tanks, new environments in the tanks and new sets of fish. What are the impacts of pain and stress in these procedures and what can we do to refine the handling? For example, special recovery tanks are getting more common to use, to make it easier for the fish to recover.

How can we identify a happy fish?

Today we also know more about positive responses in fish – signals that indicates wellbeing. Physical factors such as eating, moving and other natural activities are ways of study the wellbeing. Svante tells about other differences:

Lynne studies pain relief and brain responses on zebrafish embryos. Since they do not fall under the legislation on animals used for scientific purposes, many studies are performed on embryos as an alternative to adult fish.

— We need to know more about embryos, and how they respond to stress and pain. As far as I have seen, they respond to pain in much the same way adult fish do, and painkillers are as effective on embryos’ behaviour. This knowledge could make a major change in fish welfare at laboratories.

Skin swabbing as an alternative method

In another project, she studies the effects of skin swabbing as an alternative method to fin clipping, which is a common method to sample DNA from fish.

— We use the same software system to study skin swabbing as an alternative method, Lynne says. Fin clipping involves placing the fish under nonterminal anaesthesia and removing a part of the caudal fin which causes pain. Our studies show that skin swabbing is just as effective and has less impact on the fish with no pain and less stress.

Svante has an interest in enrichment of the tanks. Todays’ artificial and plastic plants do not impress him:

— Many artificial plants expose the fish for chemicals and toxins. We work on inert materials, materials that do not affect the water, such as medical silicone and 3D-structures. It does not have to look like plants; we are working on some kind of curtains to set up in the tank. They need to be semi-transparent to make the fish visible if you are about to study their behaviour.

Environmental enrichment has to be designed in a way that reduce the risk of monopolization. Dominant fish easily monopolize the enrichment and hence make the non-dominant fish even more stressed.

Lynne and Svante agree on the need for national coordination and support. The 3Rs Center has a task to share and disseminate knowledge on all 3Rs. All kind of activities to promote new knowledge or recommendations are ways to improve the 3Rs work in Sweden. Svante is clear on one need for action:

— There is a lack of standardisation in this field. The use of zebrafish increases, but the knowledge base does not correspond. We need to do things in a more structured, evidence-based and similar way. To be able to compare different studies and data, one must be sure to perform the studies under the same conditions.

— I think it is crucial for the Center to meet the animal welfare bodies regularly, to be a support and a relevant contact to them. They need easy access to current information from an objective source. My experience from UK and their national centre also shows the importance of attending scientific meetings to represent the 3Rs.

Svante and Lynne also mention funding as necessary to move things forward. They agree on an important task for the 3Rs Center, to have a regular and good dialogue with funders and politicians.

— Finally, we should have a 3Rs Prize in Sweden! It does not have to be money – I think the attention would be enough to strengthen the 3Rs in Swedish research, says Lynne.